I was a little girl I had a Great Aunt that lived about 8 blocks from my house.  In the summer or on nice Saturdays my Mother would let me walk over to My Aunt Olive’s to visit.  Sometimes my Mother would send me to Aunt Olive’s with a basket (almost like Little Red Robin Hood) of goodies.

Whether I went because I just wanted to visit, or because my Mother sent me on an errand, I would usually spend time sitting with my Aunt.  She didn’t have any t

oys, she didn’t have a computer, or GameBoy, If fact she didn’t even have a television.

Now I know it might seem like her house was a boring place but She took time to talk to me.  We talked about all kinds of things.  She would always take time to play a special game with me.  The game was “EYE SPY”.   We would go to her living room and set down.  Then I would look around the room until I spotted something. And then I would say, “I spy something red”, or some other color.   Then she would then try to guess what secret object in the room  that I “spied”. After she guessed what my secret object was it would be her turn to “spy” something and then I would try to guess what it was. 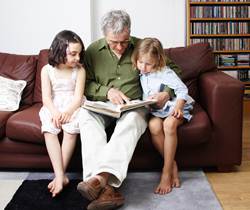 was not a hard game, anyone could play, but I think that sometimes my Great Aunt would pretend to have a hard time figuring out what  my secret spy object was, to make me feel good.  S

I thought it might be fun to play EYE SPY with you.  Instead of using object in my Great Aunt’s living room I have spied some Bible objects.  Can you figure out what they are?

I hope there is someone older in your life that you make time for and who takes time for you; maybe someone who can help you solve my Bible “Eye Spies”!